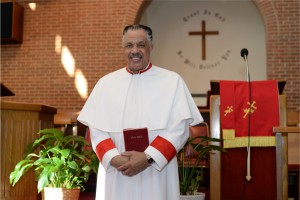 Rev. Nathaniel Benjamin, Jr. was born in Whitesville, North Carolina to First Lady Bernice and Pastor Nathaniel Benjamin, Sr. on November 13, 1944. He is the younger of Sis. Ida B. Payton and the late Sis. Bernice Coleman. Pastor Benjamin graduated from JH Hayswood High School in Lumberton, North Carolina in June of 1962. He is married to First Lady, Deaconess Mary Stewart-Benjamin and is the father of one daughter, First Lady Zelena Harris, three sons, Brandon, Byron and Rev. Bryant Stewart. One daughter-in-law; Sis. Lindsey Stewart and one son-in-law; Pastor Brian Harris. He is the grandfather of Bria Nate’ and Zanira LaSandra.

Pastor Benjamin was called to preach in June of 1970 and was licensed to preach in December 1970 at the Friendship Baptist Church in Trenton, New Jersey under the pastorship of Pastor Willie J. Sanders. He graduated from the Philadelphia Biblical University in May of 1974. Pastor Benjamin joined the congregation of the Wayne Ave. Baptist Church in 1972 and served as Associate Minister under the late Pastor Daniel C. Evans. Pastor Evans retired in 1974 and a Pulpit Committee was charged with seeking a new pastor. On August 18, 1974, a letter was sent to Rev. Benjamin asking him to accept the pastorship. He accepted and he, his late wife Sandra and daughter Zelena became the new first family. Rev. Benjamin was ordained on Friday, November 1, 1974 and was installed as the new pastor on February 12, 1975. His installation was preceded by a week of services with area churches and congregations.

Under the leadership of Pastor Benjamin, the church continued to grow spiritually, financially, and in membership. In his first years as pastor, successful fundraising made it possible to renovate the parsonage, remodel the church, including carpeting, pews, pulpit furniture and air conditioning. In 1983 and 84, an extensive building expansion program was undertaken. A complete rebuilding and enlargement of the church was accomplished.

Pastor Benjamin formerly held offices in the Middlesex Central Baptist Association and the Concerned Ministers of Trenton and Vicinity. Pastor Benjamin is a pastor who is well respected by his former Church in New Jersey as well as by Churches in other states. During His 32 year pastorship at the Wayne Ave. Baptist Church, he formed many spiritual and lasting relationships. One of the most touching was with the late pastor, Rev. Dr. Edgar L. Williams, Sr. of Second New St. Paul Baptist Church in Washington, D.C.

For nearly 20 years he blessed Pastor Williams and the members of Second New St. Paul by delivering the Annual Church / Pastor Revival Messages each night for one week in October. Here, once again he gained the love and respect of many.

After a lengthy illness, in December 2003, Pastor Williams received his final reward. One year later a Pulpit Search Committee was appointed to fill the Pastoral Vacancy.

After reviewing over 175 applications and resumes, on Saturday, October 14, 2006, the Second New St. Paul Baptist Church, in a special business session voted to extend the call to Pastor Benjamin to be the next pastor of this great church. It was an overwhelming vote of 171 – 53.

On October 22, 2006 The Second New St. Paul Baptist Church received a Letter of Acceptance from Pastor Benjamin. On Sunday, December 3, 2006, Rev. Nathaniel Benjamin, Jr., officially stepped into the Pulpit as the Pastor of Second New St. Paul Baptist Church. In the short time that he has been here, he has made a tremendous impact on the spiritual well being of the congregation. Attendance has increased, offerings have increased, and the overall willingness to support our church has improved.

Pastor Benjamin is a man who believes in the necessity and power of prayer; he is a servant of others; and most importantly, he is a man of God. He is a member of the National Baptist Convention, Missionary Baptist Ministers Conference, and President of the Board of Directors of The Green Valley Senior Citizen Building. In the pulpit, behind the desk, he delivers God’s Word; he preaches and teaches the truth. At the bedside of the sick and afflicted in mind and body, he administers comfort, kindness and healing through God’s Holy Spirit. Pastor Benjamin is a powerful man of prayer. He has stood by many families as dear ones passed through the valley of the shadow of death.

Highlights of accomplishments of the Second New St. Paul Baptist Church under the leadership of Pastor Nathaniel Benjamin, Jr.

“The Spirit of the Lord God is upon me; because the Lord hath anointed me to preach good
tidings unto the meek; he hath sent me to bind up the brokenhearted, to proclaim liberty to the captives, and the opening of the prison to them that are bound.”
Isaiah 61:1